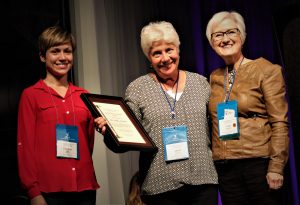 At the November 2016 AOSA Professional Development Conference, we awarded Dr. Janet Robbins, Professor Emerita of Music Education at West Virginia University, the American Orff-Schulwerk Association’s Excellence in Research Award. In a letter of recommendation submitted by Dr. Martina Vasil, Assistant Professor of Music Education at the University of Kentucky School of Music, Dr. Robbins career is described as a “distinguished record of scholarship and research that has contributed to Orff Schulwerk nationally and internationally.” A pioneer in qualitative music education research, Robbins “wrote the first ethnographic dissertation in music education. Her thesis borrowed from ethnographic techniques and anthropologic methods to investigate the “culture” of two elementary Orff music classrooms. This work led to several conference presentations and a publication in The Orff Echo (“A Composing Community: Portrait of an Orff Classroom,” Summer 2002).”

“Her service to the research community of AOSA has been significant. She was the first chair of the AOSA Research Interest Group (RIG) in 1991. In 1993, Dr. Robbins was appointed to the Editorial Board of The Orff Echo, in which she edited the new research column.” From 1993–2001, she solicited and edited 22 articles from teachers/scholars from the United States and abroad. Her two-year investigation of Carl Orff’s life contributed to the success of the 1995 AOSA National Conference celebrating the Carl Orff Centenary. As co-chair of that conference, “she worked with composer Libbey Larsen to mount the premiere performance of her commissioned piece, “Song-Dances to the Light,” which involved over 200 children and orchestra.

Dr. Janet Robbins, we salute you and we thank you, for these accomplishments and many more. We are grateful to you for your gracious leadership, mentoring and service to our AOSA community. To our friend and colleague, we say, Bravissima!