Arnold E. Burkart, 90, passed away on Saturday evening, April 21, 2018 at IU Health Ball Memorial Hospital, Muncie, Indiana. Arnold was born in 1927 in Medicine Hat, Alberta, Canada and moved to California in 1945 where he entered Fresno State College as a Music Education major. After graduating, he became a music teacher and music consultant in many different schools in California. He was an interrogator/interpreter with the U.S. Forces in Austria during the Korean War. His interest in the Orff-Schulwerk type of music education led him to teach at Ball State University beginning in 1967. 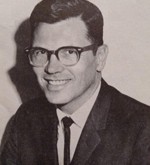 Arnold co-founded the American Orff-Schulwerk Association and was its first President. He also holds a Master’s degree from Fresno State and a doctorate from Indiana University. For many years, he led tours in Europe for music teachers and led workshops in South Africa, England, France, Canada and Germany. In 1991, he and his family lived in Taiwan where he taught music education courses. After retiring from BSU in 1992, he taught at North Florida Community College from 2002-2009 then moved back to Muncie.

He edited and published the magazine Keeping Up with Orff-Schulwerk for 10 years and is the author of many books on music education. In 2014, he received AOSA’s Distinguished Service Award.

Online condolences may be directed to the family at www.meeksmortuary.com. Donations may be made to AOSA in Dr. Burkart’s memory.